MDOC2D and the Future of DMP | COL Robert Meeuwsen (NLD A, NATO C2COE) 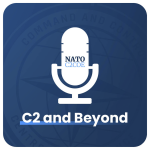 C2 and Beyond
MDOC2D and the Future of DMP | COL Robert Meeuwsen (NLD A, NATO C2COE)

In 2019, the NATO C2COE commissioned a two-part study on the future of the command post. The ‘Future of the Command Post’ explored the attitudes and expectations of senior NATO leaders, and academy students towards technology, and the theoretical dispersed command post of the future. Respondents largely embraced the idea of technology acting as a supplement to decision making and their own C2 process, and the impact it could have on this new, dispersed environment. Though most were optimistic at this future, it wasn’t immediately clear what a future that openly embraces the use of state-of-the-art technology would look like; the NATO C2COE subsequently presented its vision for this future with the release of the Multi-Domain Command and Control Demonstrator (MDOC2D).

The MDOC2D placed military leaders into a virtual environment that improved not only the availability of information, but also the overall presentation while harnessing widely available technology. The feedback from those who demoed the MDOC2D was clear; this was a reality that could instantaneously improve a commander’s C2 and ultimately support their decision-making processes at the same time. With this realization of a future fraught with technological enablers, more questions are still left to be explored like: how does a commander adapt their own experiences to fit this future landscape? Or, what is the effect to NATO operations in a more technologically advanced environment?

In today’s episode, LTC (ESP A) Miguel Gonzalez Merino (NATO C2COE) tackles the implications of the MDOC2D and the future of decision-making process with the NATO C2COE Director, COL (NLD A) Robert Meeuwsen.