I am proud to present to you the review document of the annual NATO Command and Control Centre of Excellence (NATO C2COE) C2 Seminar supported by Headquarters NATO Rapid Deployable Corps Spain, held in Valencia, Spain, from 13 to 15 June 2017.

One of the key decisions made at the 2016 Warsaw Summit was to project stability in the Euro-Atlantic area and beyond. In order to be able to do this, NATO has to enhance its ability to undertake effective C2 across the full spectrum of missions, especially in those missions where partnering with civilian organizations is required. Projecting stability from a C2 perspective means a focus of effort on ensuring interoperability, enhancing shared situational awareness, adapting to challenges and threats (agility) and keeping structures with partners sustainable.

The aim of this year’s seminar was to understand command and control when working closely with civilian stakeholders in operations, such as a Senior Civil Representative, Host Nation authorities, civilian leadership of UN or EU missions and other organizations. I am delighted that key figures from these organizations agreed to speak at the seminar in order to achieve its aim:

The seminar itself boasted a wide range of participants, including senior military leaders, NATO officials, NGO's, defence industry officials and staff from 20 different nations, all of whom contributed to the discussions in this challenging area.

The seminar speakers provided the audience with different perspectives on and experiences with C2 in an environment where civilian and military organizations are working close together. Most of the speakers agreed on the convenience of sharing information between the different actors present in an operation. However, this perception is seen differently from a civilian and military point of view. Since the civilian organizations work in a more flexible and "undisciplined"manner, which is sometimes hard to manage, the military organizations restrict information sharing due to security restrictions.

There is much to do in NATO, and in the civilian world too, to really connect the command and control structures and be able to apply a holistic effort to resolve challenging situations. However, NATO, nations and some civilian companies are doing their best to shorten the time in which we can see this happen. Federated Mission Networking and Mission Partner Environment Civilian Military (FMCM) project, the Information Clearinghouse and Release Gateway (ICH-RG), the Risk Adaptive Access Control (RADAC) concept and the current operations conducted by the Regional Coordination Centre of the Canary Islands (CCRC) are good examples of NATO, nations and the industry evolving on the right path towards achieving the ambitious end goal of integrating military and civilian command and control and management structures.

Technology is frequently cited but is not the only tool NATO needs to enhance the command and control relationship with civilian organizations. Will, trust and C2 agility are compulsory elements, all belonging to the human aspects of C2, which have to be implemented in NATO and the civilian counterpart organizations to achieve the goal of C2 integration. 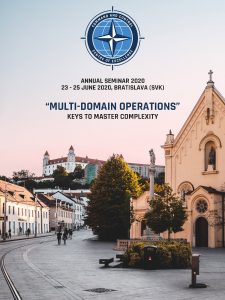 Annually, the NATO C2COE organises a seminar. in 2020 it will be conducted in Bratislava, Slovakia, from 23 to 25 June at the Lindtner Hotel, in Bratislava. In today’s hybrid environment, it is imperative for commanders and their HQ’s to be able to work off the most, the most accurate and the most recent information possible, in order to gain and maintain an operational advantage! Multi-Domain Operations are key in this.

Annually, the NATO C2COE organises a seminar. This year it was conducted in Brussels, Belgium, from 25 to 27 June at the Park Inn by Radisson hotel Brussels Airport. In today’s...
See all courses