Last week the NATO C2COE had the honour to welcome a new member to the Centre which included a promotion to Captain. The NATO C2COE is expanding with both new members from participating nations as well personnel of the National Reserve Corps of the Netherlands.

The National Reserve Corps (Natres) protects and secures the territory of the Netherlands. Natres consists of approximately 3,000 reservists. They carry out their military tasks in addition to their civilian jobs or studies. Organisations are continually adapting to changing circumstances. This also applies to the composition of armed forces personnel. Civil organisations in the Netherlands (business community, government agencies) are making increasingly intensive use of flexible workers.

Captain Olierook is a Network specialist and part of the Support Section of the NATO Command and Control Centre of Excellence. 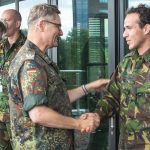 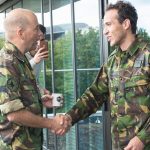